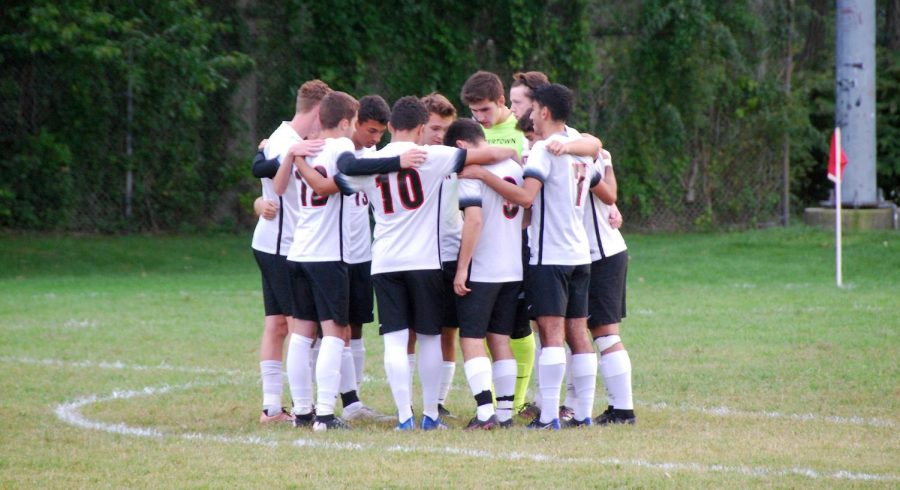 The Watertown Raiders boys’ soccer team went on the road and beat its fierce rivals Melrose, 1-0, on Thursday, Sept. 20, to move 3 points clear of first place in the Middlesex League Freedom Division.

The game started off sloppy because of the rain the previous day. Melrose’s grass field was not only muddy, but also had a puddle in the center of the field. This made the game even more dangerous than it already was and caused multiple mistakes.

Although the game was very even, Melrose kept knocking on Watertown’s door, but it was the Raiders who would strike first.

Chris Iannetta launched a free kick into the box from half, and it appeared Alex Egan knicked it on with his head straight to Xhonatan Kadi. With loads of time, Kadi thumped the ball into the net with a cracking volley. It ended up being the game’s only goal.

The first half soon ended, Watertown players and coaches fired up and ready to put away Melrose in the second half.

The second half was similar to the first 40 minutes of the game, sloppy and reckless. Melrose could of had the equalizer 20 minutes in, instead, Watertown keeper Devon Breen had the save of the season. A header was going into the top corner, everyone thought it was in — that was until Breen came flying out of nowhere and palmed it out, securing Watertown’s lead.

Watertown parked the bus for the last 10 minutes of the game. Tackles came flying in and shut down Melrose. After multiple minutes of added time, the refs blew the final whistle, giving the Raiders the win.

After the game, Egan and fellow senior Luke Murphy hid in the dark and waited for their coach, Frank Cacia, to walk through. At the right moment, they dumped all of the water on him to celebrate the big win.

Watertown’s next game is on Saturday, Sept. 21, at Victory Field against Snowden at 6pm. Come out and support the boys!