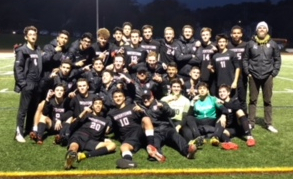 The Watertown boys' soccer team celebrates after winning the 2018 Middlesex League title with a 3-0 victory at Burlington on Wednesday, Oct. 24.

The Watertown boys’ soccer team won the Middlesex League on Tuesday, Oct. 23, with a 3-0 win over Burlington.

With Burlington being in last place with only one win all season, Watertown was on top as the first whistle blew. The Raiders pressured Burlington and kept knocking on the door, but a couple of great saves by the keeper kept things all square.

The breakthrough came through Ruben Sara shortly after. A beautiful set up ended in a goal. Alex Egan passed it to Rodrigo Freitas, who then gave it to Paulo Costa, who would dummy it, leading Sara onto a breakaway. Truly an outstanding goal from the Raiders.

Although the Raiders stayed in Burlington’s half for the remainder of time, they could not find a second goal. They had shots but none that really tested the keeper. The first half would end with Watertown up, 1-0.

Watertown’s players and coaches knew they had this game in the bag, but were not happy as they were playing down to Burlington’s level. Inspiring words from Coaches Cacia, Calden, and Edwards would fire up the Raiders up for the second half. 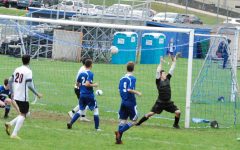 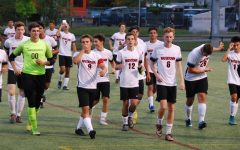 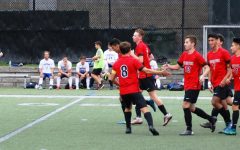 The second half was the same as the first 40 minutes, Watertown dominated everything. Burlington would win the ball and then lose it a couple seconds after giving Watertown possession again. As the Raiders looked for a second goal, they were unlucky as shots went everywhere but in.

The first big chance came through Freitas, a good one-two combination lead to a shot. Everyone thought Freitas had netted his ninth goal of the season, however, it hit the inside of the post and somehow stayed out.

Watertown would double their lead through Caiden Kiani. The sophomore, who is in top form, added another goal to his collection. A ball in from Nick DiPace went straight to Costa who would dummy it again to Kiani, who would thump it into the back of the net with a half-volley. The keeper got a touch on it, but it was too powerful for him.

The Raiders weren’t done. They got a corner a couple minutes later, Egan whipped it into the box and captain Luke Murphy would head it in for his fourth goal of the year, giving Watertown a 3-0 lead.

With this lead, the intensity of the game went down. With subs being brought in, the game was slow and in Watertown’s full of possession. The game would end, 3-0, giving Watertown the Middlesex League title.

Watertown’s next game is Thursday, Oct. 25, as it plays Wilmington away at 6 p.m.. Wilmington beat Watertown at Victory Field earlier this season, so the Raiders are hoping to beat the Wildcats on their senior night.

It’s the last regular-season game before the MIAA tournament begins, so why not travel to Wilmington and support the boys! Bring your blankets cause it’s gonna be brick.