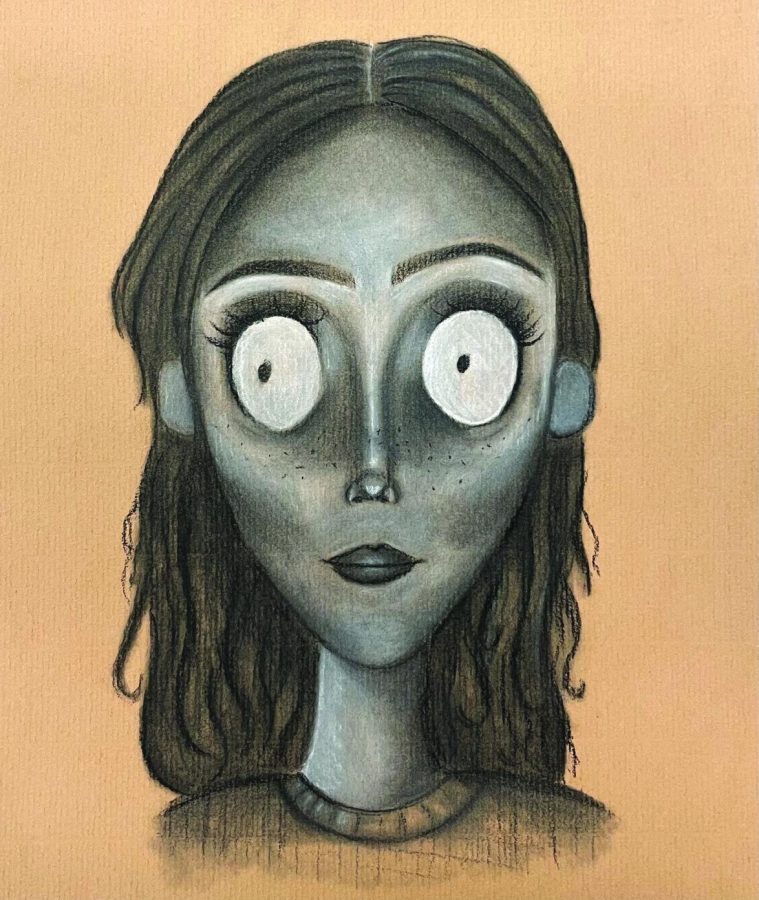 “You’ve been living the entirety of your life in vain.” At the sound of this elusive phrase, Karina released her desperate grip on her bloodshot eyes, her fragile hands coming to rest on her heart—one that was no longer beating. Around her were panic-stricken doctors with quivering fingers and nurses frantically tinkering with the machines she had begun to know all too well. Sobbing without restraint, her glum sister brushed her lips gently against Karina’s forehead. An epiphany struck Karina: her life had concluded.

And in the blink of an eye, she was immersed in a space of infinite whiteness, stripped of emotion or information. A booming voice interrupted this novel universe, proclaiming, “So, the time has come. Have you proven yourself worthy of serene immortality in Heaven?”

“I–” she stammered. “Why, I certainly believe so, for I have never gone a day without praying to you, God. And spreading the Gospel is second nature.”

“I see,” sighed the Lord, conflicted beyond comparison. “There is no doubt that you have attempted earnestly to emulate all the Saints, and I applaud you for that. And yet, there is still a missing link.”

“And what would that be?” she inquired tentatively.

“Humility,” God answered. “For decades, you have tried strenuously to consecrate the world, but while doing so, you failed to omit the hateful arrogance from your heart.”

As if on cue, countless memories overwhelmed her that unequivocally proved His point: the heated debates in which she insulted other people’s beliefs–atheists, Muslims, Jews, Pagans, or even other Christians, and how often people viewed her as they would regard an intolerant child. And these experiences didn’t only involve religion. Ever since she was a wee little girl growing up in Montreal, she could sense how quirky she was compared to other kids. School was a bore due to how naturally gifted she was, and it was obnoxious to her how other kids didn’t possess her capabilities, so she taunted them incessantly. And this carried into her adult life, including her work as an astronomer, during which she was coerced into compliance with others with what she considered to be “dubious ideas.”

“Look,” God intervened, sensing her unease. “I understand that times have been rough for you, what with your cardiovascular issues, family debt, and the passing of some of your grandparents, and believe me, I am not trying to exacerbate your struggles in any way whatsoever. But you have to understand that judgment does not only depend on piousness, but also quality of character.”

Roots of indignance began to surge in the vast pit of her mind, but then she was reminded that God is perfect, never wrong. “Okay,” she uttered reluctantly, for once without any retorts, as she knew more than anyone how correct He was. Alas, she could never come to terms with the torturous fate of Heaven’s alternative. Flames already began to consume her entire being, her eyes flitting all around, attempting to escape this feeling of desperation. I cannot live like this for eternity, she thought. Instead, hopefully gazing into the void, inspired by the grace of the Lord, she implored,

“Well, what can I do to evade the clutches of Hell’s fiery pits?”

“I’ll do anything!” she pleaded.

“Look here. Let’s say that, hypothetically of course, there was someone in the opposite situation as you.”

Perplexed, Karina ruminated for a few minutes on what He could possibly mean by that. Perhaps he was referring to someone who is certainly going to either Heaven or Hell? Or a person who was given opposite advantages and disadvantages? Maybe this whole conversation is just a test. For once, she wasn’t confident that she was capable of even passing it, and was consequently overwhelmed with butterflies where her stomach was supposed to be.

Her nose scrunched up into a cherry, and she peered at God expectantly. God explained, “He possesses all of the personality traits that you are lacking in, and yet, he is not a devout Christian. Is it more clear now what I mean by “the opposite situation?”

“Yes,” Karina replied, the adept gears in her mind digesting this abstract concept. Did he live in a parallel universe, or is he just a figment of God’s lesson, used to prove a point?

Her deliberations were thwarted by this man’s velvety voice: “God has decided to test us. If we can return to Earth in a different form, seek each other out, become close friends, and share our strengths, then we will both earn our rightful place in Heaven.”

“Why, certainly. You both deserve a second chance,” God interjected. And with that sentiment, faith overcame her anxiety. Grateful to be reminded of the venerability of God, an elated smile inched up her rosy cheeks.

Of course God would offer redemption and reconciliation. After all, Grandpa used to constantly remind me that God is love, and love is God.

Renewed by this unique opportunity, she interlaced hands with Anirak, her other half, and imagined what was in store for her future. This truly is a blessing. After all, it’s not every day people get to so clearly apply what their mistakes have taught them. A blank slate is just what I need.

The last image she processed was God’s proud grin and insightful, wide eyes, which were miraculously inserted into her mind, and then before she could even bid Him farewell, her picturesque surroundings dissolved.

Immersed in a sea of darkness, she could hear the familiar voices of heart monitors and pagers. She could even recognize the voices of the nurses who had attempted to rescue her from death’s clutches. And yet, though they failed…the immaculate God prevailed.