Whether it’s an actress, civil rights attorney, or hockey player, it pays to look ahead 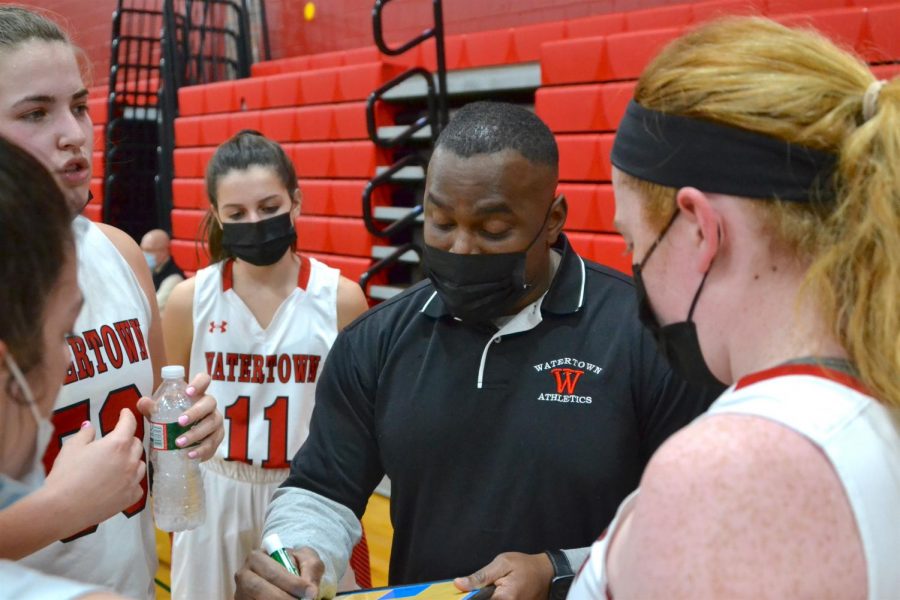 Pat Ferdinand, a coach and counselor at Watertown High, talks strategy during the girls’ basketball team’s 40-29 win over visiting Wilmington on Feb. 10, 2021.

Amid the start of the school year, people subconsciously create their expectations and goals for the journey ahead. While some people cautiously mold their class schedule and prepare to be thrown out into the real world post high school, one question remains a mystery for many people: What is your dream job and why?

Is it something you’ve dreamed about ever since you were 4? Or is it the one thing you wish for in the morning as soon as you wake up?

Dimitri Skiba, a freshman at Watertown High, is interested in being an entrepreneur and or investor.

“There’s no limit to how much money you can make and all of the girls will be attracted to it,” he said.

Same with ninth-grader Gabriel Berkowitz: “I want to be a business man so I can make a lot of money and get a lot of [girlfriends].”

Classmate Xander Correa wants to be a seafood chef. “It’s my favorite type of food,” he said.

My dream job is definitely anything related to finances. Since I was a little girl I have dreamt about owning my own company.”

Gianna Sanchez wants to be her own type of person. “I want to be an actress,” she said. “I think I see myself acting in movies because it’s a one and done thing. I would get to meet new people and express emotions.”

Dante Cosco has always wanted to be an NHL player. “I love hockey,” he said. “I’ve been playing hockey my whole life. I would want to play wing or center because those are the positions I’ve always been playing.”

Most Watertown High sophomores that were interviewed want to either be a teacher or nurse, but there were some that stood out a lot from others. Ava Hayward said she wants to be a lawyer.

This wasn’t always her dream, she used to want to be an astrophysicist, but realized she wanted to pursue a career as a lawyer because she loves to argue.

Max Bennett said he wants to be press secretary at the White House. He sought out this career when he watched some of the press conferences.

“Engaging with the press and knowing national affairs is something that interests me, and representing the United States inspires me.”

Julianne Sabino said she wants to be a neonatal nurse, which she explained is basically caring for babies after birth at the hospital. When asked why she would love to pursue this, she said, “Because I love babies, being around babies, and taking care of babies.”

When she was younger, she said she wanted to be a midwife, which involves being present for the actual birth, but once she found out about neonatal nursing, she wanted to do that instead.

I have felt this amazing connection with animals since I was little and have always wanted to advocate for those who don’t necessarily have a voice. This is my plan A, B, C. This is what I want to do for the rest of my life, hopefully.”

Edward Gukasyan said he wants to be a Microsoft engineer because he loves robotics and coding. Noah Capello on the other hand, has no idea what he wants to do. “I’m gonna ride the waves, y’know,” he said.

WHS seniors also had some future goals to share.

“My dream job is definitely anything related to finances,” Maria Vitoria Lima DaSilva said. “Since I was a little girl I have dreamt about owning my own company.”

When asked about who or what could have ignited this passion, she simply said she wants a stable job to give back to people.

“My favorite thing about my dream job is being financially stable and successful to help my family and loved ones,” she said.

On the other hand, Beatriz Oliveira identifies herself as more of a nature kind of girl.

“Being born in the countryside, I have felt this amazing connection with animals since I was little and have always wanted to advocate for those who don’t necessarily have a voice,” she said.

Beatriz would love to work with horses. Like many people, if it doesn’t work out she doesn’t really have a backup plan.

“This is my plan A, B, C. This is what I want to do for the rest of my life hopefully,” she mentioned in a humorous way.

She said the secret is to just wait and hope for the best of what the world has to offer.

Students talked about what they want in the future, but teachers, on the other hand, already have a career.

John Rimas, who teaches civics and history at WHS, mentioned growing up in a family of teachers and educators, which eventually led him to become interested with the idea of teaching.

Similarly, history teacher David Mastro said that he has always dreamed of being a teacher. Both of his parents were teachers; his two biggest role models. The Providence University alumni told a story about how he discovered his passion during his junior  year of high school.

Mastro says that this is when he discovered his love for teaching and realized this could be a possible career.

About teaching, Mastro stated, “Everyday is never the same, ya know? You get new challenges, new obstacles, you meet new kids, every year, in every class.”

Pat Ferdinand says he wears many hats at Watertown High, including being the girls’ basketball coach and working in Room 222.

When Ferdinand was asked what his dream job was he replied, “Definitely not this.”

His first response was to coach basketball at a Division 2 level. But later he said he always wanted to work in counseling. Ferdinand said that he wanted to be a counselor because it is a really big piece in helping people and, more importantly, giving back.

Abby Hendrick is a member of the Raider Times staff.