Administrators to slow process after ‘overwhelming response’ from students, alumni, and community 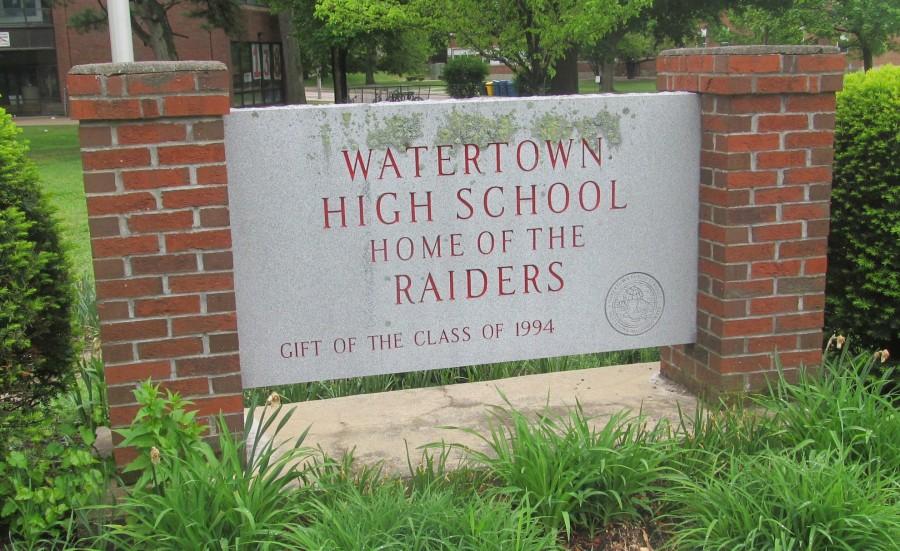 Students and faculty members at Watertown High School were supposed to vote late in the school day on Tuesday, May 19, to choose a new Raider logo to replace the de facto image of a Native American, but that vote was indefinitely postponed by school administrators.

Citing in a press release the “overwhelming response from alumni and community about the efforts to create a mascot for WHS,” the administration will “slow down” the voting process, giving time for meetings with alumni and community members, consultations with the logo designers, and edits to the proposed logos.

The process of changing the Raider logo came as “too much of a surprise to the community,” said WHS principal Shirley Lundberg in a 10 a.m. exclusive interview with the Raider Times in her office, some three hours before the vote was to take place.

Selecting a logo, however, will remain a student-led process, she said.

The news was delivered to WHS students during their advisory period, when the vote was originally scheduled to have been held. Responses ranged from excitement over the postponement to indifference.

On the morning of May 14, as part of a school-wide contest to design a new logo, student council officers met and selected four student-submitted works as finalists. These finalists, which will be kept pending the vote, consist of a futuristic horse-head emblem, an outline of a rat head with an eye patch against a black background, a design of a skull wearing a duster, and an insignia of a snarling tiger. All four finalists kept the “Raider” nickname.

Meanwhile, those in the school and the community opposed to the design of a mascot have been speaking out for their cause. A petition called ‘Save the Red Raider!’ launched on May 19 has already gathered more than 400 signatures, and a Facebook page entitled “Save The Watertown RED Raider” has garnered more than 1,200 likes. Most of the resistance to the logo change is from people who cite their pride in the logo and its meaning to Watertown history.

We need to slow the process down because the community as a whole, including those who have graduated from Watertown High School, wants to have a voice.”

Watertown schools superintendent Dr. Jean Fitzgerald said she welcomes the opportunity to find a solution that is acceptable to all sides.

“Even when we disagree, that can bring about the best solution in the end,” she said in an exclusive interview the Raider Times in her office.

Fitzgerald also noted, however, that the de facto Raider logo was never the official school mascot.

“One of the community members did some research and found that the first time that caricature could be found anywhere — it was in a yearbook — was in 1963, and it was never officially adopted. It was never placed on any uniforms or official gear,’’ she said.

This was formally declared several years ago in what most people confuse to be the apparent termination of the logo.

But, before Tuesday’s vote took place, the administration determined that the process was too overwhelming for some folks in the community, who felt perhaps excluded from the process.

“We need to slow the process down because the community as a whole, including those who have graduated from Watertown High School, wants to have a voice,” said Dr. Fitzgerald. “People care, and that’s what’s important here.

“It speaks to the positive experience that they must have had at Watertown High School. It’s very meaningful to them, so it speaks highly of Watertown Public Schools and the community.”