Student contest to produce new look for school mascot May 22; Raider nickname may be replaced

After decades of students and fans wearing face paint and feathered headdresses for football games and pep rallies, Watertown High School will be getting a new mascot — replacing the Raider with one that will likely have nothing to do with the image of a tomahawk-wielding Native American.

Watertown High School groups have used the old logo and mascot unofficially since it was discontinued about seven years ago, but now the school is making the change official.

According to a statement issued by principal Shirley Lundberg, the old logo was  “stereotyped a nation/race of people.” Brian Brewer, the WHS dean of students, said in an interview that many other schools in the Massachusetts Interscholastic Athletic Association with team names and mascots that may be considered offensive have already changed them.

We want to make sure it’s appropriate, so no Native Americans or anybody else is stereotyped”

The process for changing the Raiders’ logo started Wednesday, April 29, with a whole-school assembly explaining why and how the change would occur. Lundberg announced a competition, open to all WHS students, to propose a new logo. The new logo must be reproducible, original, and “may not stereotype any group, race or nation of people.”

Students must submit logos by May 13, and those will then be narrowed down by the class officers in the four grades, leading to a final student and faculty vote on May 19. The winning logo will be announced May 22.

“We want to make sure it’s appropriate, so no Native Americans or anybody else is stereotyped,” said WHS junior class president Farid Mawanda.

Additionally, the team nickname “Raiders” is not binding to the new mascot. According to the contest rules, new names may be submitted along with logo designs.

When asked about the financial cost of changing the name, Brewer said it would be “a lot. We would have to change the team uniforms immediately.” 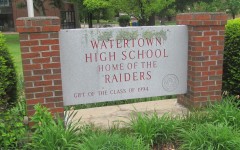 Despite having its share of phone-addicted and chatty teenagers, the 8 a.m. assembly was quite relaxed and uneventful. The big screen swallowed the auditorium, while the dramatic documentary registered in the audience members’ minds.

After the assembly, students moved to smaller advisory and homeroom classes throughout the school to talk about the mascot and the logo contest. By all accounts, passionate debate and discussion commenced.

“It was nice to hear people debate both sides of the argument without getting very aggressive,’’ junior Sara Fulton said. “It was an enjoyable discussion.”

Students discussed topics ranging from potential reasons for inconsistent Native American feelings to painting faces red at football games. Some advocating for the removal of the logo suggested that representing indigenous people could remind them of brutal moments in history; some defending the WHS logo said the usage and presentation of a mascot varies from school to school and cannot be judged by its name or picture.

English teacher William MacLaughlin was quick to remind his students that whether the logo should be removed was not the issue, as that had been done years ago, further complicating the issue and prompting junior Becca Grossman to ask, “What’s the point of bringing this up now?”

The most intriguing aspect of the school-wide conversation was that the new logo may require a nickname change as well.

McCurley echoed a sentiment among students that the Raider logo has never been tagged as offensive by students before.

“I’m 50 percent Native American and I don’t find the Raider offensive,” said junior Hannah Cook. “The school is being overly dramatic about this. All we need to do is change the image and stop making it into such a big deal.”

Some students wore signs to school Wednesday that said, “Keep Our Mascot,” and one wore a war bonnet. Others sported jerseys and hoodies emblazoned with the Raider logo, though it cannot be certain whether these were worn in greater numbers than on normal school days.

Others applauded the decision to move to a new logo. Junior Kira Peterson stated that having the current de facto Raider logo “is like saying a certain type of person is more aggressive.”

According to senior Ghi Coulter-de Wit, who conducted a survey of 100 students as part of a project in her AP Statistics class, around 48 percent of WHS students strongly or somewhat strongly believe the Raider logo should be kept, 26 percent believe strongly or somewhat strongly believe that it should be changed, and 26 percent were indifferent. The survey also indicated that students who played sports at WHS were more likely to support keeping the old Raider logo.

But, say administrators, that matter is not up for debate. The old logo has been retired and the new logo and/or mascot will be announced in just over three weeks.

The Watertown High School community anxiously awaits further developments in the creation of a new mascot. What Watertown High sports fans will paint on their faces at sports games in the future remains uncertain.