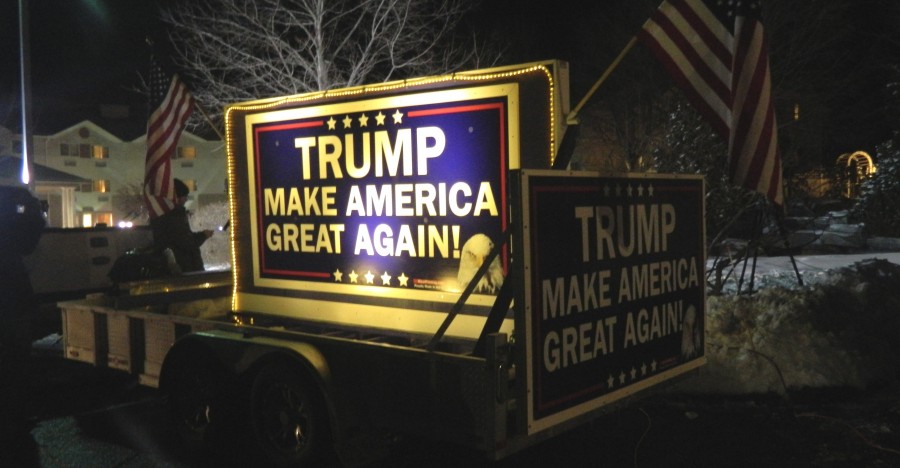 It can get pretty cold in New Hampshire at 6 p.m. Very cold. Even when the air’s the same temperature down in Massachusetts at the same time, I swear the cold is, well, different somehow. More assertive, maybe. More likely to disregard clothing. Either way, it’s not the kind of cold you’d want to be out in for very long.

But to the 200 people standing in line waiting for entry to the Donald Trump Primary Watch Party at the Executive Court function hall in Manchester, N.H., this didn’t seem to matter.

Never a fan of Mr. Trump myself, I wouldn’t have ever expected to be out there in the parking lot shivering with them. But sure enough, I was there, they were there, Trump was expected to show up in an hour, and regardless of my political beliefs, I was honestly humbled by the fact that so many people would willingly vacate their presumably warm houses in these absurd temperatures to let their candidate know they love him.

I was on assignment for The Raider Times, reporting on the events of New Hampshire primary night, the candidates and politics, and the people who gravitate to one camp or another. At this point in the evening, we had already stopped at the University of Southern New Hampshire’s athletic center to pick up our press passes to the Hillary Clinton rally that was being held there, but the armed Secret Service agents performing a sweep of the building had told us to come back in an hour. So we had decided to take a side trip to see Donald Trump to kill time.

We weren’t quite certain which of a number of function halls along the side of the state highway was the one we were looking for, but when we came to the one with nine assembled TV news crews, a spilling-over parking lot, and the very big line, we figured we had found it.

Since we did not have press passes for this event, we had to wait in the line with everyone else, which was inconvenient, but it allowed us to scope out the scene. People of all ages were waiting there, and, surprisingly, all colors too, although the demographic was heavily skewed toward Caucasians, many of whom were over 50.

There were Trump shirts, Trump socks, Trump sweaters, Trump scarves, Trump stocking caps, and what appeared to be a Trump cowboy hat. In front of the building next to the line was a large TV screen playing CNN, reporting on the breaking news that the Islamic State had plans to perform an attack on US soil using disguised Syrian refugees in 2016. With all the spirit of camaraderie, no one seemed to pay any attention to it.

I noticed a photographer out of the corner of my eye aiming his camera at me and did my best to look reporterly, using my new foam Donald Trump “You’re Hired!” finger as a surface to write on. My colleague Cris had gone off to interview a tall, bearded man in an American flag suit, and I snapped a picture of an assembled group of Jewish men standing with a banner that read “Presidential Candidates! Please Speak Up For Palestinian Rights! Authentic Jewry Opposes Israel & Its Actions!” It had not occurred to me that there would be demonstrations.

After about a half-hour, we started to get very envious of the press pass-holders and their early entrance to the nice, warm building, so we decided to drive back to the Clinton event to check on its progress.

Remember the nine TV teams and the huge crowd? By contrast, the Carly Fiorina primary night event — at a smaller function facility, not too far from Trump’s — consisted of maybe 70 supporters and a C-SPAN crew in half a banquet hall shared with a golfing club. It was a pretty stark divide, and underscored the fact that Fiorina would concede the presidential race the following day.

By the time we arrived back at the Clinton rally, the Secret Service had finished their sweep and were now letting supporters and journalists in through their metal detector. We all passed through without complication and were issued our official press passes. I wondered if all the press corps felt as cool wearing those orange tags as I did, or if it was just old hat to them. That’s something you don’t think to ask the press when you’re talking to them.

Our badges allowed us access to the press room, which was one cordoned-off quarter of a gymnasium down a long whitewashed hallway past a Secret Service man with an M4 rifle. In the press room there were 10 rows of plastic tables and chairs, about halfway filled with journalists quietly working at their laptop computers. In the back of the room was a table of cookies and coffee (which we greatly welcomed), and in the front were two TV screens broadcasting Clinton advertisements about different social issues on repeat, presumably as a source of quotations.

Suddenly, we heard a loud roar from the other gym, and crossed the room and peeked around the corner to the rally. And it was a rally.

Hundreds of Clinton supporters carrying signs and the letters of the secretary’s last name, chanting slogans such as “I believe that we will win!” and “HillaRY!” at intermittent frequencies seemingly vacuum-packed into the small gym, waiting for their candidate to arrive.

I noticed that the heavily Caucasian makeup of the room was very similar to that of the Trump rally, and probably a symptom of being in the 94 percent white New Hampshire.

We press pass-holders had access to a narrow fenced-off alley along the back wall of the gym so we could film and photograph and write without fear of being trampled. Unfortunately, we were also forbidden from leaving this alley, making interview-gathering a difficult and awkward process.

Just when it looked like we would have nothing to do but count the number of TV cameras pointed at the podium in the center of the room, at 9 p.m. Secretary Hillary Clinton herself walked out onto the stage, alongside her daughter and presidential husband, to deafening response that drowned out the first minute or so of her address.

She had lost the New Hampshire primary to Senator Bernie Sanders, we learned, and she offered her congratulations to him. But, she assured her audience, “We’re going to take this campaign over the entire country,” and about the young voters who have overwhelmingly preferred Sanders over her in the polls, “even if they don’t support me, I support them.”

Clinton’s speech, although energetic, was very much lacking in substance. She talked about issues that mattered to her but did not elaborate on how she would address them. Then again, such detail might be considered unnecessary, given that she was speaking directly to those she had already convinced, preaching to the choir.

After 10 minutes of morale-boosting, she waved goodbye and descended from the podium to Rachel Platten’s “Fight Song” and aggressive applause. Bill Clinton stayed around for a while, shaking hands and posing for selfies, but eventually he too was escorted off. And no sooner did the Clintons leave than the journalists opened their computers, sat down in the aisle, and started to type their blog posts, tweets, and newspaper stories. They had deadlines to meet, after all.

After conducting one final sweep of the gym for points of interest, we returned to the Trump party as it was just wrapping up. He had just declared victory in the primary, beating out second-place finisher John Kasich by a good 18 percentage points. Alcohol was served at all the events we visited, and back at Trump’s we had difficulty finding interviewees who were not leaving or inebriated, except for Ch. 7 newscaster Dan Hausle and an economics professor. But by this point we had gotten a good sense of what goes on every four years in this otherwise low-profile state.