Culley Byham is ready to give Watertown her best shot 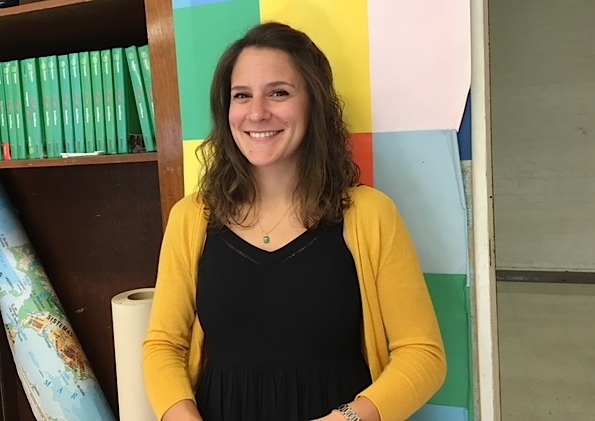 Do you know Macullen Byham?

She is the new strings teacher in the Watertown (Mass.) Public Schools. Ms. Byham, who goes by “Culley”, visited the Raider Times newsroom at Watertown High School on Friday, Sept. 7, for an interview with student reporters..

Ms. Byham spent the summer moving up from Myrtle Beach, S.C., “in a two-door little clown car packed with stuff.” In the long drives back and forth, she listened to a lot of music, including the soundtrack of “Hamilton”.

“If you played a little bit of the instrumental track, I could probably play the whole thing, all 2 1/2 hours,” she said.

She bought tickets for her and her aunt to see “Hamilton” when it comes to Boston this fall as a birthday present to herself.

She found a place to live in Watertown, which she really likes. She said she likes the Boston area because it is walkable and bikable. She also enjoys kayaking and roller-blading.

Her grandparents were teachers. She said when she was growing up in Williamsport, Pa., she used to play teacher with her little sister, and teacher her the alphabet with flashcards.

Ms. Byham went to Penn State to study music education. When she graduated, she took some time off and took a job at Disney World in Orlando, Fla., where she worked for almost a year in merchandise, where one of her tasks was sewing names onto hats.

She said she never got to work as a dress-up character at Disney, although she said she was perfect for it: “I was the right size and everything!”

However, she said it was a good thing she didn’t do that.

“If I was a [dress-up character], I would never have left,” she said.

Ella Pastore is a member of the Raider Times staff.