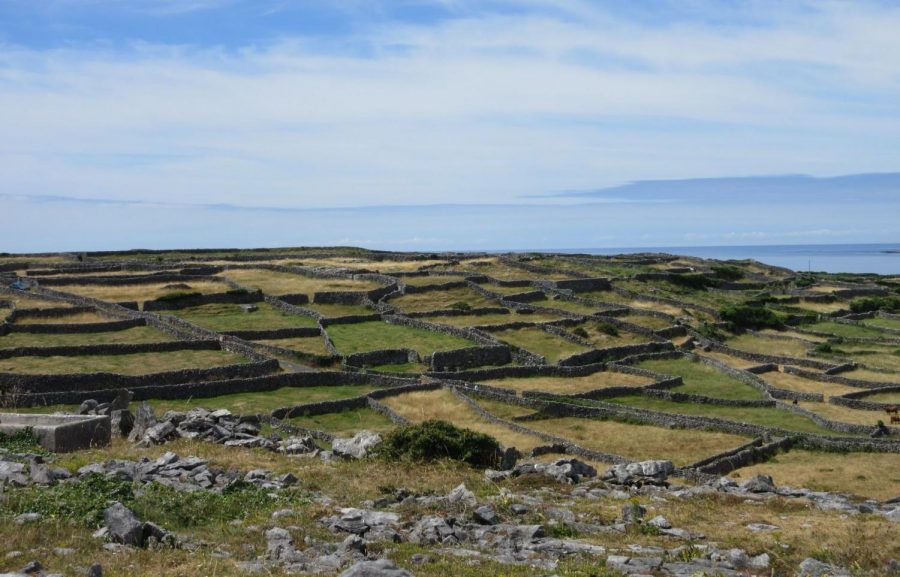 Gallery|21 Photos
Raider Times photo / Anais Markwood
A view from a high spot on Inisheer. The whole place was covered in rock walls like these, each surrounding a tiny plot of land that seemed to contain nothing but grass. Some penned in cattle or horses but most, mysteriously, were empty.

In July, my family and I went on a 10-day trip to Ireland. We flew into Dublin and, using a rental car, we drove southwest until we reached the Beara Peninsula, went north to an area near Galway, and finally made our way back east to Dublin.

Along the way we encountered many beautiful sights and terrains, from small towns to bustling cities, from cottages to castles, from the ocean to mountains, from endless green fields to miles of rock.

We found many magical places during our travels, some popular tourist spots and some far off the beaten track.

As if driving on the left side of the road wasn’t challenging enough, almost all the roads in the more rural parts of Ireland were very narrow, some only wide enough for one car. By the time we were driving through Killarney National Park, we thought we had figured out the whole small road thing. Turns out, we had not. We saw a sign pointing toward the town we were staying in that night, so naturally we followed it, turning onto the tiny dirt road winding away into the grass. It was only after driving for about 10 minutes and seeing no sign of other cars or any indication of where the road led other than deeper into the mountains we realized that the “road” we were driving on was in fact a hiking trail, meant for boots, not tires. We turned back but it was the most beautiful drive of our trip.

The next day we ventured into Glengarriff Woods Nature Reserve, a spot off the beaten tourist track. We took a hour-and-a-half hike from the visitor center, going up the mountain and coming back down on the river trail. Then we drove deeper into the park where we saw many sheep and a quaint wooden bridge that crossed over a small stream.

After spending most of the day driving Northeast to County Clare, we opted for one of the most well-known tourist attractions in Ireland, The Cliffs of Moher. These amazing cliffs boast gorgeous views, a great hiking trail, a home to many species of sea birds, and a breathtaking 400-foot drop to the crashing waves below.

On Friday, we opted for a more local activity. We took a ferry from where we were staying in The Burren (County Galway) out into the North Atlantic. The ferry took us out to Inisheer, the smallest of a group of islands known as the Aran Islands, which lie right off the midwestern coast of Ireland. In Gaelic, the Island is known as Inis Oír, which means “The east island”.

The next day was rainy. However, we decided to brave the weather and headed into Galway. It was a bustling city, in spite of the weather and was home to thousands of small pubs as well as beautiful green spaces, a fish-filled river, and the beautiful campus of The National University of Ireland Galway.

On Sunday, we finally left our cozy B&B in the Burren and began to make our way back to Dublin. On the drive to Bective in County Meath, where we would be staying that night, we came through a town called Athlone in County Westmeath. In Athlone, we drove past a castle that was sitting right in the middle of town so we decided to go in and check it out.

The castle, built in 1210 was at a very strategically placed location in ancient Ireland and thus has a rich and often bloody history. It is now open to the public and hosts a museum that tells the story of Ireland through the ages.

On Sunday night, we made it to the mill farm where we were staying in Bective. The next day, we headed out to the Hill of Tara, an ancient site with a history dating to the 11th century. It is a vast park with mysterious ring-shaped mounds in the earth that are suspected to be ancient burial grounds. At the summit of the innermost mound in one of the rings is a small monolith known in Gaelic as Lia Fáil, which means “the stone of destiny” or “the speaking stone”. Legend has it that if the true king of Ireland touched it after performing a series of challenges, it would let out a shriek heard by all of Ireland proclaiming him the High King of Ireland. This site was at the crossroads of all the major roads in ancient Ireland and is where the High King’s castle is said to have resided.

Later that day as we made our way back to Dublin, we stopped in another tiny town named Trim, which was the home of Trim Castle, the ruin where the movie “Braveheart” was filmed.