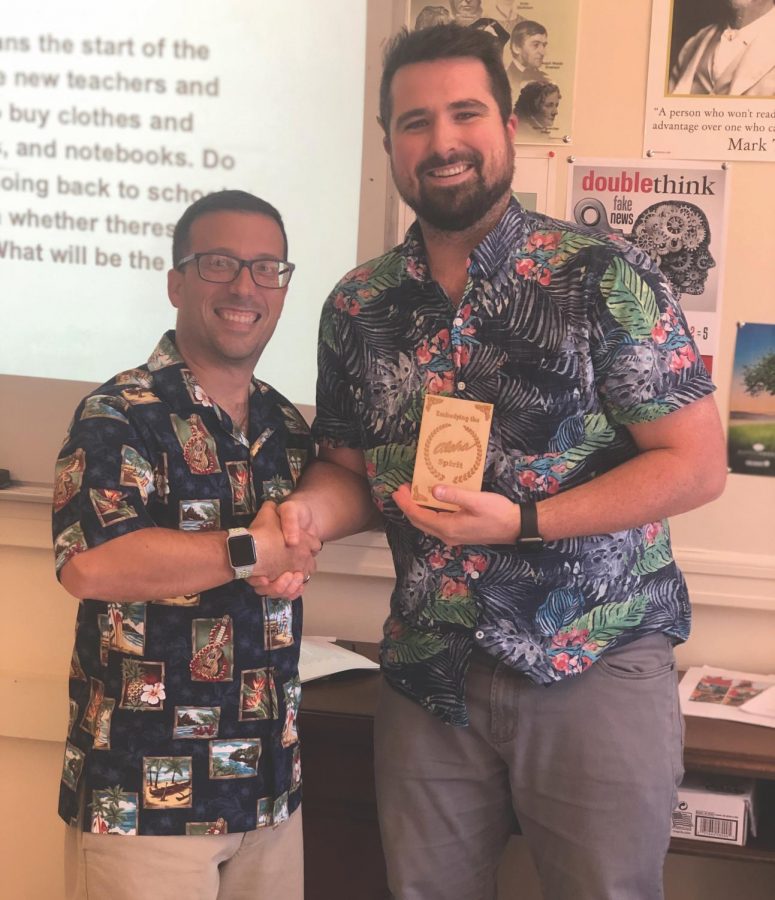 Gallery|7 Photos
Aloha Fridays have brought a sense of community from the Hawaiian Islands to the halls of Watertown High School this fall, thanks to history teacher David Mastro (left).

Aloha! You may have seen the staff of Watertown High School in Hawaiian shirts or wearing leis these past few Fridays, but do you know why? David Mastro, a history teacher here at WHS, has instituted an Aloha Friday!

Because Hawaii is such a big part of him and his family’s life he has bought a vacation house there. But as much as he loves Hawaii, Mastro has to stay in Massachusetts due to his job and his kids’ education. He said that once he retires he would move to Hawaii.

Mastro defines Aloha spirit as a sense of unwavering community, people who support one another, so it’s no surprise he wants to bring this spirit to WHS.

While Mastro does encourage both students and staff to come adorned in Hawaiian attire, like shirts or leis, he says that’s not the most important thing. He thinks that even just bringing the Hawaiian spirit into the school is his main goal.

Ultimately, Mastro wants the Watertown community to be a kind, welcoming place where people can be themselves.

To add to the fun, he makes it a point to honor a student or faculty member each week for their notable amount of spirit, whether or not a shirt is involved.

Emma Fallon, president of the Class of 2022, said, “I think Aloha Friday is a great addition to the school. I love seeing the teachers get really into it — especially Mastro.”

She also says that she hopes that the event will continue to grow and evolve. However, she has noticed that the teachers seem to be the only ones participating in Aloha Friday, but she hopes the teachers’ spirit will rub off on the students.

Hillary Glencross, a fellow adviser for the sophomore class, has taken part in Mastro’s Aloha Fridays. When asked if she thought these Fridays were helping to spread the message of the Aloha spirit, she said, “Yes it does. I work in the PE and Health department and we all bought our Hawaiian shirts together and then showed Mastro our shirts with music.”

When asked if she enjoyed dressing up, she explained that she is not typically an outgoing person, so she has only dressed up once, but it was a big step out of her comfort zone.

When asked if she wants this tradition to continue, she replied, “Yes, I want a sense of community to continue, maybe the theme could switch up sometimes, like Watertown Spirit Fridays for example.”

While the tradition and spirit of the event continue to grow, Aloha Friday can safely be called a success so far. Aloha.

Mariana Urizar is a member of the Raider Times staff.

Fathema Heidari is a member of the Raider Times staff.

Eleni Hum is a member of the Raider Times staff.