Raiders' 5-0 start puts them on top of Middlesex League; trip to Burlington next up on Friday, Oct. 17

The Watertown High football stands at attention during the playing of the national anthem before the Raiders' Senior Night game at Victory Field with Melrose on Oct. 10, 2014.

The Watertown High School football team has sprinted out of the gates this season, rattling off five straight wins to grab a seat firmly atop the Middlesex League Freedom Division. It’s no small feat to be more than halfway through the season without a stumble, but head coach John Cacace says his team doesn’t dwell on those sorts of things. 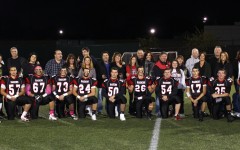 “We don’t talk about winning and losing a whole lot and certainly not about being undefeated,’’ he said. “What this team has accomplished thus far is great, but we are a long way from the finish line and we have a lot more work to do so focusing on getting better and continuing to improve is our main priority.”

After making quick work of their two nonleague games to open the season (21-6 over Medway, 26-6 over Shawsheen Tech), the Raiders faced their first test in an away contest against Stoneham. Senior quarterback Nick Giordano, who had mostly stuck to running in the first two games, put on an exhibition through the air, throwing for 247 yards and three touchdowns in a 29-14 triumph. Tyler Poulin, Jared Grillo, and Zach Rimsa all took Giordano passes to the end zone.

Giordano followed that up with a dazzling four-TD performance in a 40-22 dismantling of defending Middlesex League champs Wakefield, scoring twice with his arm and twice more with his feet.

Kyle Foley and Austin Farry both caught touchdown passes (the latter of which was a 69-yard completion), and Conor Kennelly converted two field goals to contribute to the Raider win, bringing their record to 4-0.

“Obviously another tough game,” Cacace said. “Nothing gets easy and our team understands the philosophy that we just go out there and focus on the task at hand and to play with the mind-set that the next play is always the most important play.”

It was on Senior Night at home at Victory Field on Oct. 10 that Watertown faced its toughest test, pulling out a 28-26 win against Melrose. A pivotal late-game interception by Farry followed by an 81-yard TD run by Giordano earned the home team their fifth consecutive win.

“I think our team played tough,” said Cacace. “We never let up and played hard for 44 minutes. We took away their running game, which was important and we never stopped playing aggressively.”

Sophomore running back Zach Rimsa continued his breakout season with two touchdowns for Watertown, and later recovering an onside kick to seal the victory.

“We have several goals for the season, and we accomplished one Friday night [against Melrose],” said Cacace. “We have a long way to go to accomplish the rest of them, so we continue to work at reaching those goals.”

Next up, the Raiders will take their 5-0 record into Burlington on Friday, Oct. 17, in a game that could cement another winning season and put them on the brink of a Middlesex League title.