The seniors on the Watertown High School football team and their families pose on Victory Field prior to their last regular-season home game, a 28-26 victory over Melrose on Oct. 10, 2014.

The Watertown Raiders football team continued its hot streak with a massive 28-26 win over Melrose on Friday, Oct. 10, to take control of first place in the Middlesex League Freedom Division.

“We took away their running game, which as important and we never stopped playing aggressively. Every snap is the most important snap and our guys don’t worry about what’s transpired thus far in the game. They just keep playing and that allowed us to continue to make plays down the stretch.”

It was Senior Night at Victory Field, and the seniors made a big impact early as senior Brian DallaCosta recovered a fumble to put Watertown 10 yards from the end zone. Sophomore Zach Rimsa punched in the first touchdown of the game two plays later, a 2-yard run to give the Raiders a 7-0 with 5:30 left in the first quarter. 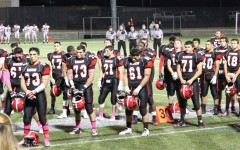 Senior quarterback Nick Giordano (11 for 18 passing for 91 yards) threw an interception on the first play of the second quarter, which led to Melrose’s Brian McLaughlin rushing for a 39-yard touchdown to put the visitors on the board. Watertown senior Erik Baghdasaryan made a big tackle to thwart a 2- point conversion, leaving the score at 7-6.

Melrose running back Jack Hickey burst through the Raider defense five minutes later for a 12-yard dash to the end zone, but the visitors again failed to convert the extra point, though they still held a 12-6 lead.

Watertown went on the attack again, with just three minutes to respond before halftime. Giordano hit senior receiver Austin Farry for a big 20-yard play, putting Watertown deep in Melrose territory. Giordano ran the ball up the middle himself for 3 yards and a touchdown with just 25 seconds left in the half, and Watertown went into the locker room holding a 14-12 advantage.

The third quarter was scoreless, but Giordano led the Raider offense 88 yards down the field at the start of the fourth quarter, highlighted by a pair of key third-down completions to junior wideout Kyle Foley before Rimsa tallied his second score of the game, a 1-yard touchdown to give Watertown a 21-12 lead.

Melrose quarterback Jake Karelas wasted no time in getting those points back, marching his team down the field before floating a pass into the end zone, which Colby Andrews hauled in for a 19-yard touchdown.

Melrose got the ball back on their own 15, with about three minutes to make up their 21-19 deficit on the scoreboard. After Karelas completed a pass to Andrews for a big 39-yard gain, things were looking bleak for Watertown. That was until Farry read the Melrose quarterback’s eyes and came up with a huge interception with 2:10 left on the clock to hand the ball (and seemingly the game) to Watertown.

Two plays later, Giordano swung out to his left, found a gap in the defense, and took off down the left sideline, never looking back until he reached the end zone for an incredible 81-yard touchdown to seemingly secure another WHS victory. Giordano totaled 121 yards on seven carries with two touchdowns on the night.

Conor Kennelly kicked his fourth extra point of the night, and with just 1:42 left in the game, it looked as if it was all over for Melrose, as WHS led, 28-19.

But Melrose didn’t quit. Karelas found Andrews again for an 11-yard touchdown this time, bringing Melrose within 2 points at 28-26.

However it was too little too late, as Rimsa smothered an onside kick to officially seal the game, and the Watertown seniors were able to walk off the field victorious after their final regular-season home game.

The win left the Raiders in possession of a 5-0 record heading into the next game, Friday, Oct. 17, at Burlington. Being so late in the season, talks of finishing the year undefeated naturally arise.

“We don’t talk about winning and losing a whole lot and certainly not about being undefeated,” Cacace said. “We continue to work at getting better and preparing for our next opponent.

“What this team has accomplished thus far is great, but we are a long way from the finish line and we have a lot more work to do so focusing on getting better and continuing to improve is our main priority.

“We have several goals for the season, and we accomplished one Friday night. We have a long way to go to accomplish the rest of them so we continue to work at reaching those goals.”