Raiders run out of magic 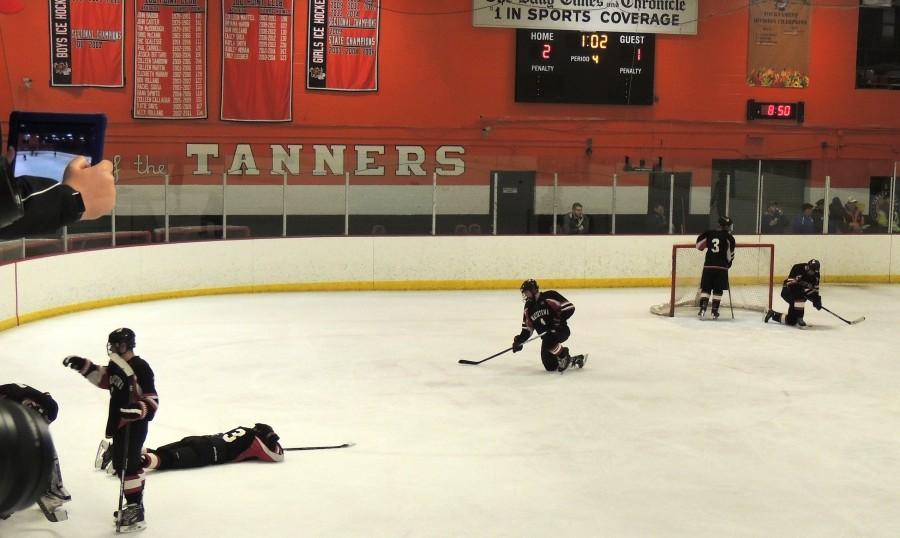 In the end, there just wasn’t enough magic left.

Two years after falling to Wayland in OT in the North semis, the Watertown High boys’ hockey team found a similar fate Monday night, as the defending Division 3 state champions bowed out in the North finals with a 2-1 overtime loss to the same Warrior team.

“Like I always say, ‘Score more goals than the other guy and you win,’ ” said Watertown coach Mike Hayes. “They did a better job at that than we did. I think we had a couple breakdowns in the defensive zone, and we didn’t capitalize on a lot of scoring chances and they did and that’s the game. 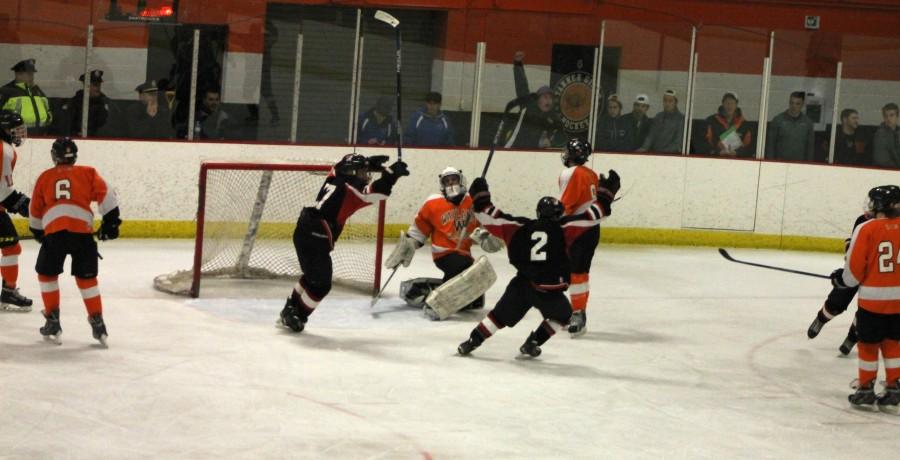 Senior center Michael Giordano had the only goal on the night for the Raiders, but it was Riley Bonner’s goal with 1:42 left in overtime that handed Wayland the Division 3 North trophy.

“We definitely respected that team,” said Raiders senior Nick Martino. “They worked hard, they had good coaching. I think it was a good matchup, and it could’ve gone either way, but unfortunately it went to them tonight.”

Watertown senior goaltender Jason Hughes made 22 saves, but it wasn’t enough as the Raiders just couldn’t pull this one out. 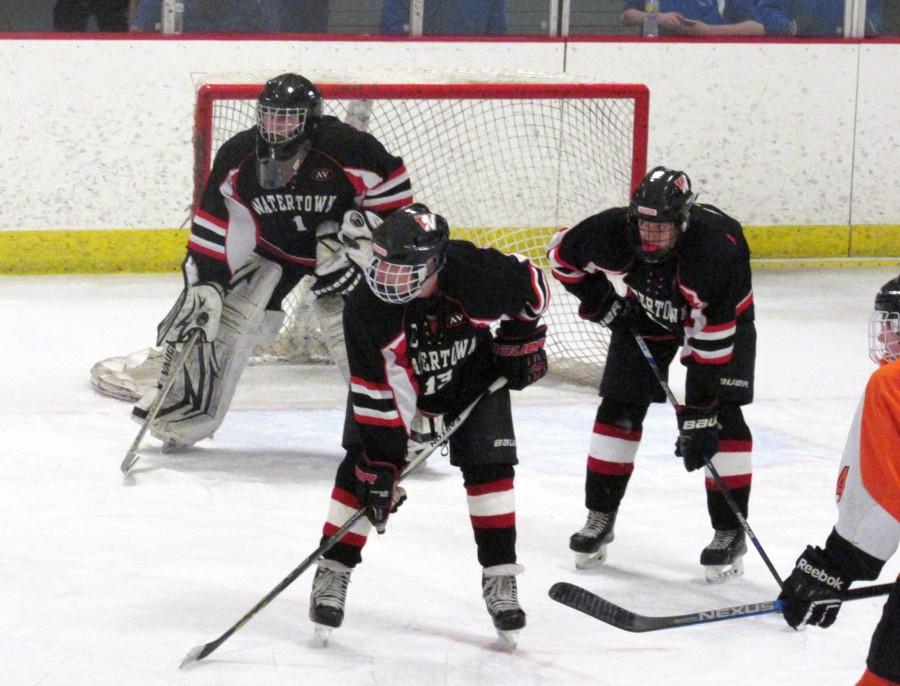 “We played OK,” said Watertown senior Tyler Gardiner. “We were playing with sickness today, so we definitely weren’t playing to our potential, but we played good enough that we could have done it while we were sick anyways.”

Watertown’s top line of Gardiner, Giordano, and senior Tyler Poulin were all under the weather at O’Brien Arena in Woburn, and the line that led the offensive charge during last year’s state title run spent more time on the bench than usual.

“Some guys aren’t feeling their best, but that’s no excuse, it’s just an answer to the question, and you probably saw that out there,” said Hayes. “No excuses, we left it all on the ice.” 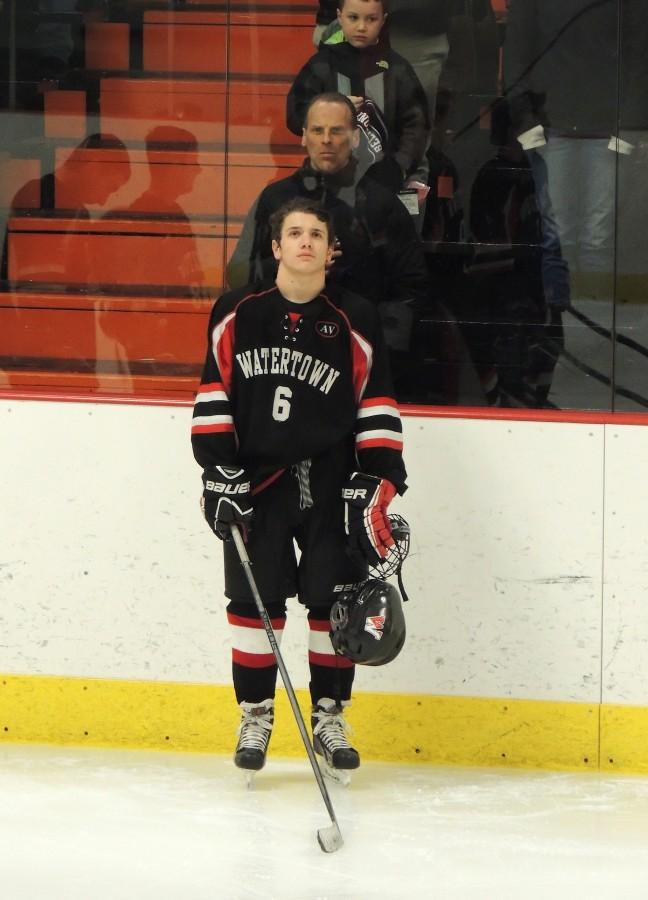 After a back-and-forth first period produced no goals, both teams managed to get on the board late in the second period.

With just under 3:00 to go, with the Raiders on a power play, Gardiner carried the puck around the net. He found Poulin at the top of the left circle, who then threw it across to a wide-open Giordano, who, in turn, roofed it to give his team the lead.

The advantage didn’t last long, however, as Wayland sophomore Joe Lydon scored just a minute later to tie it back up.

Neither team found a goal in the third period, and once again, the Raiders found themselves going to overtime. 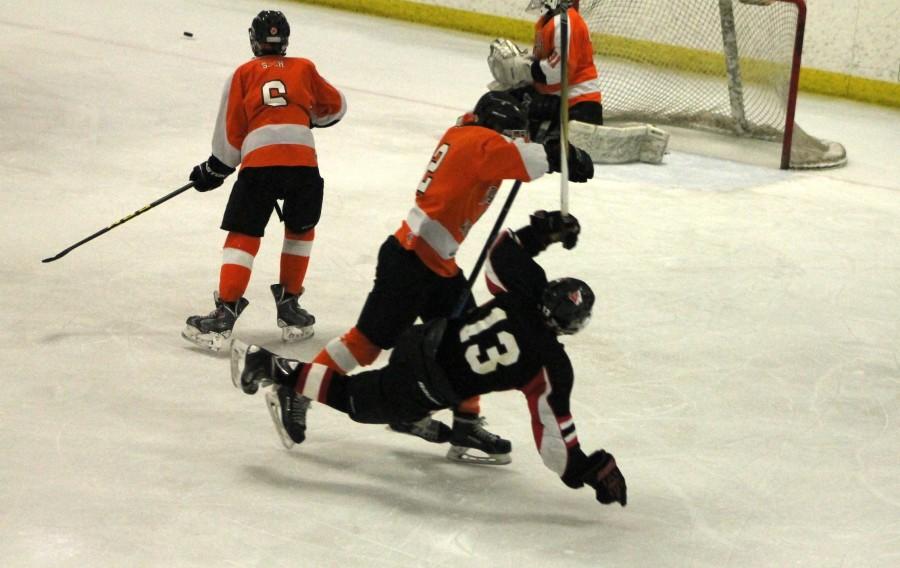 It turned out to be a simple goalmouth scramble that sent the Raiders home, when Bonner picked up a rebound in front and buried it for the winner.

After accepting their Division 3 North runner-up trophy, the Raiders raised their sticks to acknowledge the crowd that had backed them through their playoff run.

“I’m just so proud of them,” Hayes said. “For tonight, for this year, for the last four years, and it’s just a great group of kids that would do anything you ask. They’re just very easy to coach, you know, they’re state champions, and that’s something that no one will ever take away from them. First time in school history we’ve done that, and the run they made this year was really impressive.” 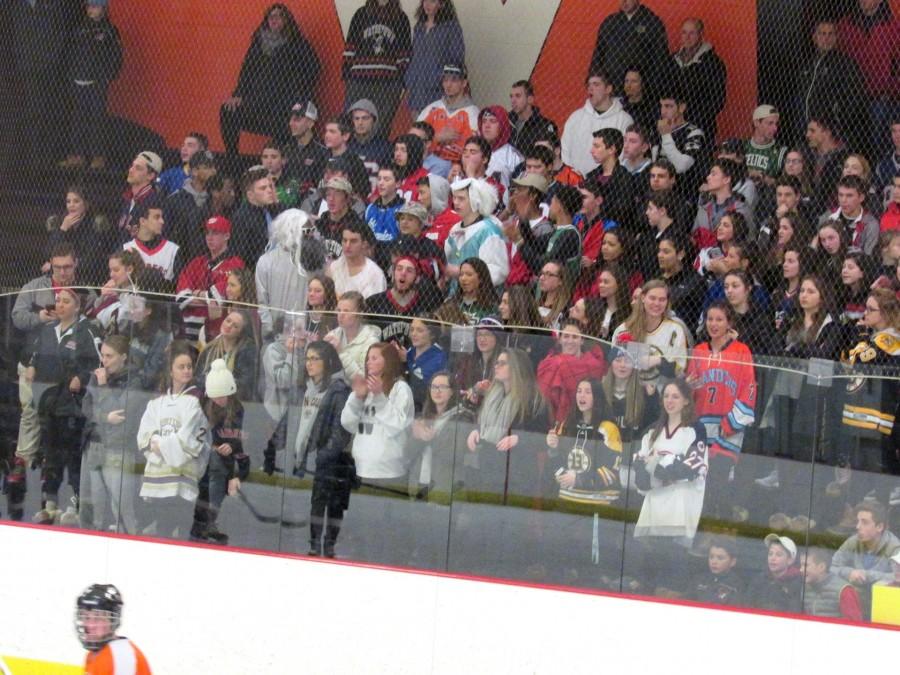 For a group of seniors that helped take home a Division 3 state championships last March, and carried an undermanned team to another deep run this time around, the sentiment was largely the same.

“Best four years of my life, for hockey,” said Poulin. “I’ll miss everything about it. I’ll miss going to locker room every day with these guys, talking, laughing, getting on the ice and battling with these guys every day, it’s been a pleasure. I’m going to miss it.”

“The best four years of my life,” Giordano said. “I’ll remember them for the rest the rest of my life, what these guys did was amazing. We won a Middlesex League championship, the North finals, a state championship, and we just made it this far again. It’s been a great time.”

“I wouldn’t trade it for the world,” said Martino. “It was the best four years of my life. I met so many people, created so many bonds with people who I’ll call my brothers for the rest of my life.” 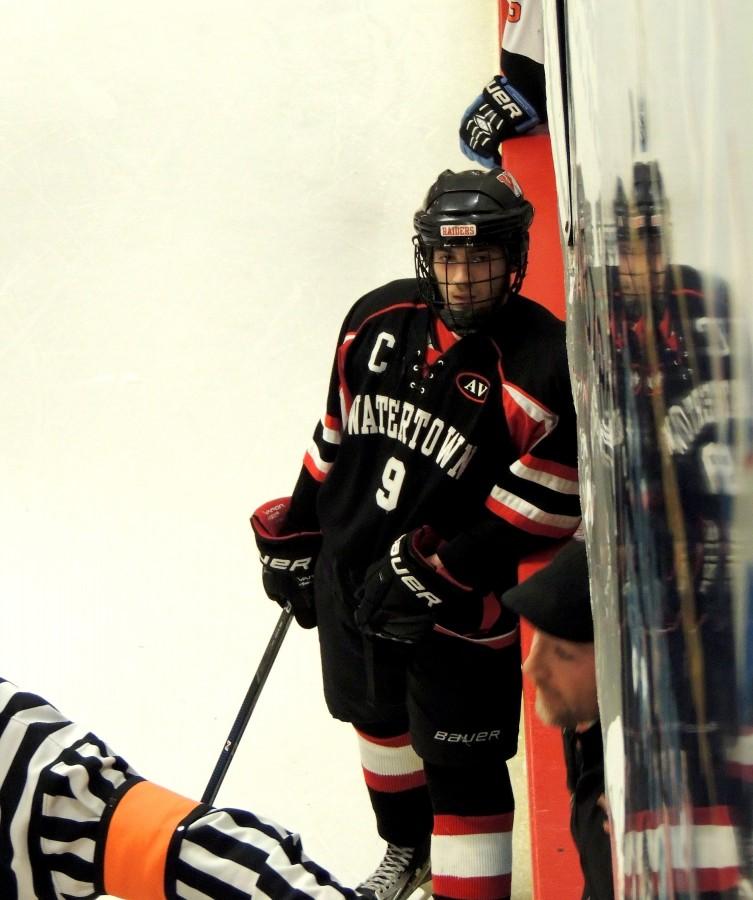 The Raiders lacked depth even during their 2015 state title run, so to have lost so many key seniors and go as far as they did in 2016 is remarkable.

“You think about losing your goalie, all your defenseman, and a forward when you’ve only been playing nine, do the math,” said Hayes. “That leaves you with four guys.

“From Barry Dunn, to Luke Murphy, the freshman, and Danny Farrar, [Matthew] Busconi, and Martino, all those guys. They all stepped up and they were unbelievable all year and I just told them how proud I was to be their coach.”