Watertown football comes out on short end against Melrose

Raiders (1-2) to play in Burlington next Friday night

The Watertown Raiders Football team fell to Melrose, 28-13, on Friday night at Victory Field in Watertown. 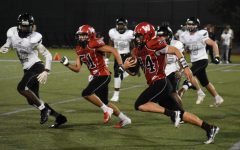 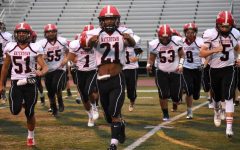 Leading the effort for Melrose (2-1) was captain Kevin Peete, who had three rushing touchdowns for the Red Raiders. Watertown (1-2) dominated possession for most of the game but was unable to find the back of the end zone at key points.

After falling behind 7-0 in the first quarter, Watertown quarterback Nick McDermott dove for the goal line during a 6-yard rush but came up just inches short of a touchdown with six minutes to play in the first half.

“I thought he was in, quite honestly,” said Watertown coach John Cacace. “That could have been a huge difference in the first half if we could have tied it up there.”

Facing the returning Division 3 state champions in Melrose, the host Raiders had a strong defensive start as they only allowed one touchdown in the first half.

Cacace attributed the defensive success to improvements in discipline from last week’s home loss to Cambridge, which was marred by many penalties for the Raiders.

“Just playing good disciplined football,” he said. “Guys getting to where they needed to be, making their reads, playing tough. I was really happy with the way we played in the first half.”

In the second half, Melrose began to capitalize on Watertown’s inability to score in the red zone. Peete, a senior, broke away for a 32-yard touchdown to put Melrose up 13-0 with four minutes to go in the third quarter.

McDermott finally found the end zone for the Watertown as he converted a 2-yard keeper with 10 minutes to go in the fourth, but freshman kicker Mason Andrade hooked the extra point wide left and the score remained 13-6.

Peete would go on to rush for two more Melrose touchdowns of 6  and 65 yards, respectively, to put Melrose ahead, 28-6, with 1:39 remaining in the game. Watertown scored on a 4-yard rush from sophomore David Manoukian with 46 seconds to go, but it was too late to mount a comeback. Sophomore Adam Haloui successfully kicked the extra point to make it 28-14, and Melrose simply took a knee to run out the clock on its next possession.

Cacace was happy about the effort on Friday, but knows there is still a long way to go if the Raiders want to defend their Division 5 North title from last November.

“We had some good plays called and good execution, and you come up an inch short,” he explained. “You just have to continue to get better and that’s what we’re doing. I thought we made a lot of improvements from last week. And we’re just gonna keep getting better.”

The Raider faithful in the stands showed their support for the players on the field with a “USA” themed student fan section. Next week, they will have to make the trip to Burlington to watch the team take on the Red Devils on Friday night.