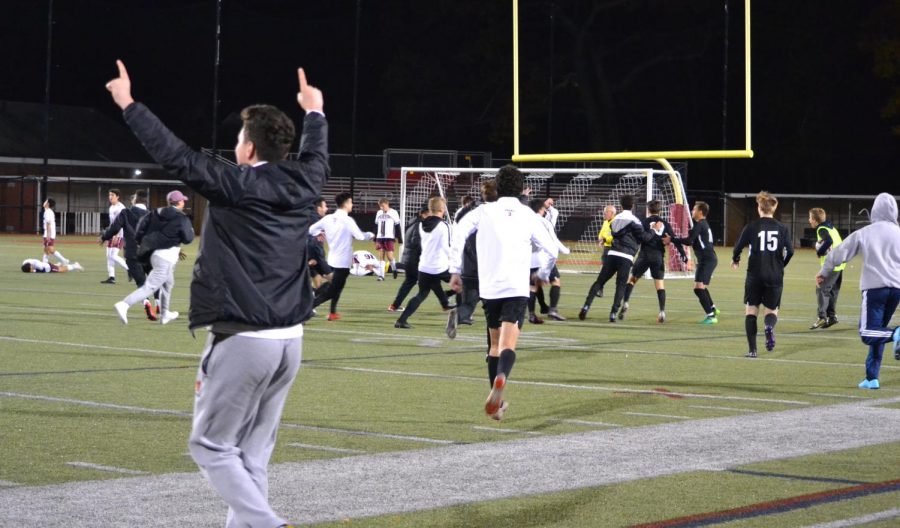 After a cold and tiring game, junior Nicholas Dipace scored in the second overtime, with only five minutes left before shootouts, to lift the Watertown boys’ soccer team over Weston on Monday and advance the Raiders in the MIAA playoffs.

“We’re gonna get a goal within the first 10 minutes, I’m calling it,” sophomore Sean McCusker bet with his teammates — and that’s exactly what happened!

The student section at Victory Field and the players on the sidelines went absolutely crazy when Dipace hit the ball in from a corner kick.

“It was very ecstatic scoring that goal and it was a very uplifting moment for me.” Dipace commented after the game.

Junior Cody Begg, thinking back on the tensions during the overtime break after technical difficulties with the Victory Field lights, said, “Overall, amazing win.”

“I thought the team showed great character, rallying back and then fighting through injuries to win it after having to do with so many obstacles.”

Junior Kenan Canca said, “The game was intense and hectic, to be a part of something like that is special and the fans were supporting us till the end. Our captain was injured, but playing with everything he had showed the effort it takes to win.”

Victoria Pires is a member of the Raider Times staff.