At music festivals, there are no solo acts

A look at upcoming Boston Calling concerts show how musicians, promoters, and journalists need each other to be successful

Journalism students from Boston-area high schools pose with Michael Christmas, Mike Snow, and Julian Benbow at a music panel at the Boston Globe on Feb. 16, 2016.

Collaboration is everything in the music industry. Teamwork is what pushes things forward.

“I would be lost if I didn’t have a team,” said Michael Christmas.

Christmas is a rapper who loves performing in Boston. He is always making music and involved with the music scene. He loves seeing upcoming artists. 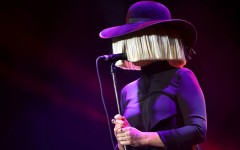 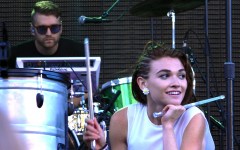 Listen up to this 'Calling'

This spring, he will be performing at the Boston Calling Music Festival on City Hall Plaza. The concert will run May 27-29 and will also feature Sia, Sufjan Stevens, Robyn, Odesza, Disclosure, Haim, Janelle Monae, Elle King, and The Front Bottoms.

All three talked about their job experiences, including what is expected of them when they are planning projects and how they get through challenging obstacles. Much preparation and hard work are required to be successful in the music and journalism industries.

Student reporters asked engaging questions and all three speakers responded with insightful answers. Benbow is a sports reporter at the Boston Globe who also writes articles about music, such as local musicians performing in Boston.

Benbow spoke about his reports on concerts and celebrity news. For example, Benbow wrote an article about Kanye West at Madison Square Garden.

“Usually my day is already planned out for me,” he said. He has to follow that schedule, so a To-Do List is a very helpful tactic to get everything done in the day.

Deadlines are very important in any job. But, meeting deadlines is especially critical for reporters because if a reporter doesn’t submit his article on time, it slows the whole production process.

Benbow highly recommends that reporters ask an editor to proofread their work.

“Editors can give helpful feedback on a piece of writing,” he said.

For Benbow, finding his career was rather easy. Ever since he was in middle school, Benbow enjoyed reading sports articles and writing stories. Now, he has a job where he can do the things that he loves. He told the students to try to find something that they are passionate about and maybe they will find their calling.

Snow is one of the organizers of the Boston Calling Music Festival. Since anything can happen at a concert, the job of the organizer is to expect the unexpected and try to prevent any danger from happening.

Snow shared that one year at the festival, there was a tornado warning and they had to evacuate about 16,000 people. Thankfully, the situation was handled with care and everyone was safe.

Checklists are important to make sure that everything is ready to go. Yet, there will be surprises and you have to be ready to handle the situations. Everything has to be safe and accidents are the last thing you want at a concert.

At Boston Calling, there are only 23 slots available for artists to perform. So, Snow’s team checks for artists who are touring and gathers a list of possible performers. Sometimes to get suggestions, his team will ask the general public who they want to see at Boston Calling. Then, the team will reach out to those artists. That’s how they were able to book Kendrick Lamar.

The lineup for Boston Calling has never been a disappointment. People have been satisfied and the turnout for the festival has been great.

The unique thing about Boston Calling is the urban backdrop of Downtown Boston, unlike Coachella which is set in a more rural area. Snow works with a small team of very creative people who can turn ideas into reality.

There is a lot of trial and error so the team must be willing to try out different things and work around problems. Play your part in the team and things will go well.

Snow hopes that this year’s upcoming Boston Calling Music Festival will be even bigger and better. He’s already looking ahead to future shows.

“I really hope the Cold War Kids can come and perform at the festival. That would be a dream,” he said.

His advice is be prepared for the worst and work your way around different situations. Things might get hard on the job but that doesn’t mean you give up. Instead, you work harder and you get the job done.

Unlike some artists, Christmas is very approachable. He likes to talk and interact with people. He is overall a very friendly guy and will spark up a conversation with anybody. Christmas works with a large group of people.

His advice is that someone is always there to help, so don’t be afraid to ask.

“I’m not that hard to contact. I’m available on all of my social media or shoot me an email,” said Christmas.

Listen up to this ‘Calling’