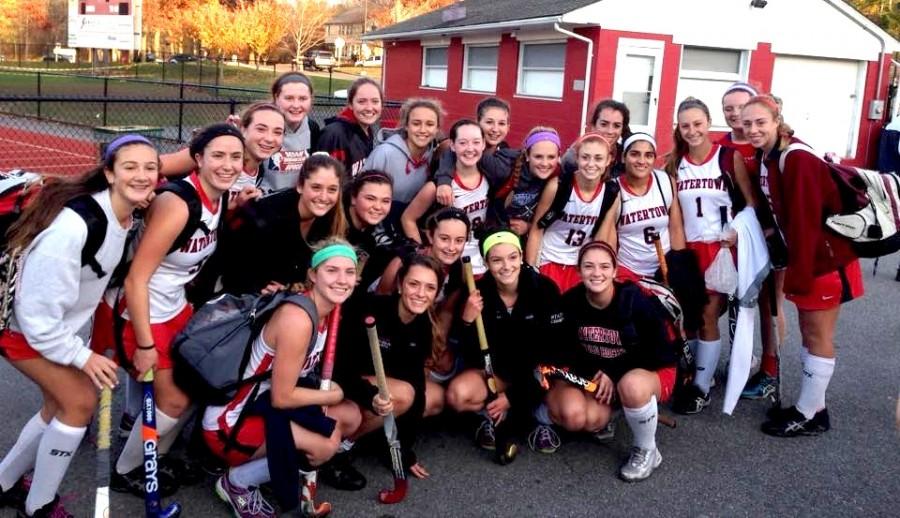 After an unbelievable season with unbelievable numbers, the Watertown High field hockey team is just one win away from affirming its place as one of the greatest powerhouses in the history of Massachusetts high school sports, as the Raiders chase their sixth consecutive state championship.

In a rematch of last year’s state semifinal, Watertown stuck to its combination of stingy defense and offensive firepower to post an identical scoreline as a year ago, downing previously unbeaten Dover-Sherborn, 4-0, on Nov. 11, 2014, at Reading High. The win clinched the Eastern Mass title and punch a ticket to the state title game on Sunday, Nov. 16.

The Raiders continued to dominate after the intermission, creating several chances, the greatest of which came when junior Ally McCall was denied by the post early on. Watertown would finish the game with a total of 19 shots, while only allowing its opponent to get off a single shot the entire game.

The Raiders managed to find a third goal when Doggett fired home a goal of her own with 18 minutes to go. The game was put thoroughly out of reach after sophomore Kourtney Kennedy assisted freshman Sydney Poulin with nine minutes remaining, completing the 4-0 rout of D-S (19-1-3)

The win moved Watertown’s unbeaten streak to a staggering 137 contests. This year, the Raiders’ goal differential is a whopping 109-0, as senior goalie Maddie Rocklin has recorded  22 shutouts in 22 games.