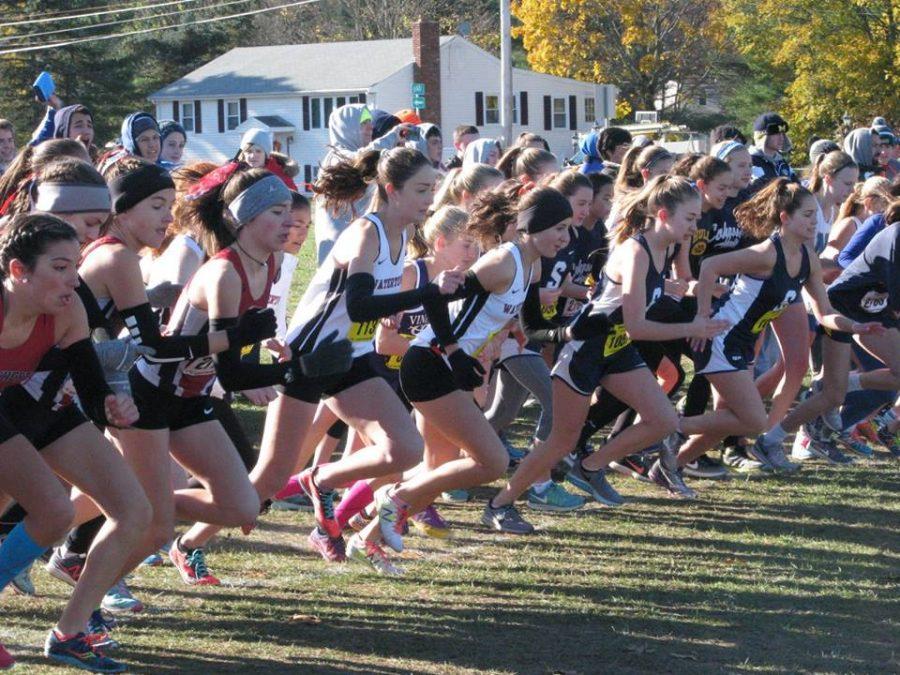 Emily Koufos took first place in the girls’ race and James Piccirilli grabbed second for the boys Saturday at the MIAA Divisional Cross-Country championships at the Wrentham Development Center.

“Today had the best individual performances in all of my 15 years of coaching,” said Watertown coach Tom Wittenhagen. “James Piccirilli is the best [boy] cross-country runner Watertown has ever produced, and Emily Koufos is the best girl runner ever produced, so it’s kind of interesting to have them both … in the same season.”

Koufos, a junior, led the girls’ Division 5 race the whole time and clocked a time of 19 minutes 5.96 seconds on the 5k course. The next finisher was 20 seconds behind her.

In the boy’s Division 5 race, Piccirilli, a WHS senior, won a hard-fought battle for second place with a time of 16:18.71, edging the closest runner by less than a second. Jack Carleo of Newburyport won in 16:05.81.

The Watertown girls finished seventh place overall in the division of 37 teams, their best finish in history. Wittenhagen credits this not only to Koufoss  outstanding performance, but also to a great race from fellow junior Elizabeth Powderly (19th place, 20:52.64), who narrowly missed qualifying for the all-state meet this weekend.

The boys placed 20th, a drop from 12th the previous year.

After a disappointing dual meet season (going 1-7), Wittenhagen believes an improvement in effort during the championship part of the season for the boys was key.

“We beat one team in the [Middlesex] league championship meet, Stoneham … and in today’s state meet we had a very fine performance, got 20th out of 38 teams, which is a reasonable improvement from where we were a month ago,” Wittenhagen said.

The boys got 11th at the league championships at the end of last month, with Piccirilli taking sixth place.

The girls team had an identical record as last year, going 4-4 in dual meets, and scoring ninth in the league championships. Koufos and Powderly came in fourth and 28th in the race, respectively.

Both Koufos and Piccirilli set school records on the Watertown home course at Arsenal Park this season, and performed impressively against the stiff competition of the Middlesex League.

Wittenhagen remains hopeful that progress can be made for both the boys’ and girls’ teams next year despite losing Piccirilli and senior Janaki Thangaraj, who placed third on the girls team Saturday.

“I think the effort that both teams exhibited, especially in the last month of the season, was very encouraging looking forward to what the teams are going to accomplish in the future,” the coach said.

Koufos and Piccirilli will compete in the all-state meet Saturday at Gardner Golf Course. For the rest of the team, the season is over, but the runners hope, as Wittenhagen has for the last 15 years in Watertown, that more success is just around the corner.