Not scared to go back to third grade 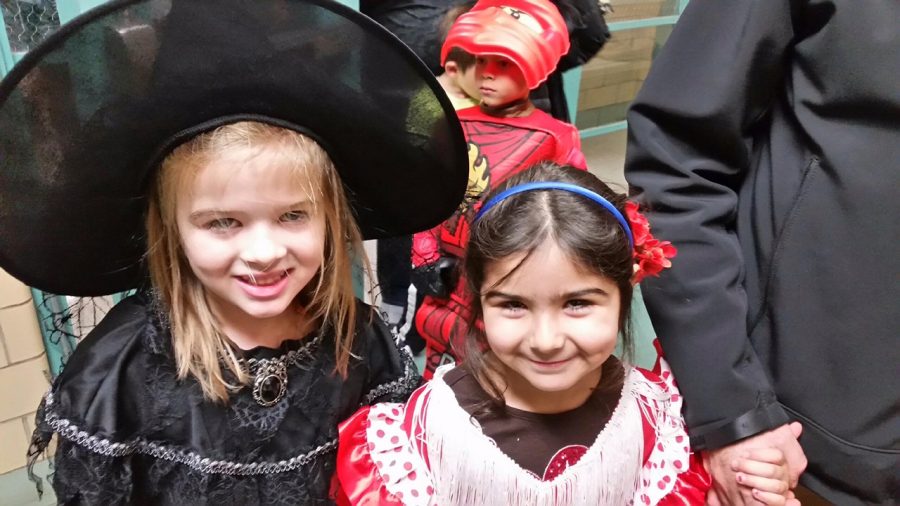 Students came dressed in costumes of all types at the annual Halloween Party at Cunniff Elementary School in Watertown, Mass., on Oct. 28, 2016.

As the air gets colder and the light of day begins to drain away, Cunniff Elementary never fails to entertain at its Halloween Party held every year.

Lasting for two hours (from 6-8 pm) on Oct. 28, 2016, this year’s event was thrilled with many spooky activities for everyone, food and beverages, and, of course, its well-known Haunted House.

The Halloween Party was filled with many children of different ages, and, of course, their parents. I saw children dressed up in inventive costumes — just like I was a few years ago.

Walking into the school, everything seemed miniature to me, including the lightly green lockers that had purple, black, and orange banners hung from one locker to another.

The event is run by the Cunniff PTO, which works very hard and whose members dedicate their time to create a scary — yet fun and safe — way for kids every year.

Not only that but the PTO asked people to bring a canned good to donate for the Watertown Food Pantry. It was a great way for everyone to enjoy their time at the Halloween Party, while also helping ones in needs. Donating a few canned goods myself, it was very eye-catching to see the bins filled with canned goods.

Scattered throughout the school, there were many things to do in the lobby, cafeteria, and gym to keep everyone occupied and entertained.

In the lobby, many tables were set up with jars containing spooky items, such as eyeballs for people to guess and win prizes, such as gift cards and awards. These were a great attraction for those who enjoyed little games, such as guesstimating, as well as a fun gift!

In the gym, many kids occupied themselves with games. Also included was a face-painting center where kids two at a time were able to get their faces painted with a variety of extraordinary animals.

Children were dressed in creative costumes, some dressed as superheroes, skeletons, and one even as a bottle of ketchup. They ran from one place to another. If they were not in the gym or the basement for the Haunted House, they were in the cafeteria.

The well-known cake walk was held in the cafeteria like always. With festive music and delicious cakes to be given out, a lot of kids were having a blast trying to land on the cute decorated placements when the music stopped.

In the cafeteria, food and beverages were served where some friends and I stood serving at a concession stand. Community service hours were offered for all students volunteering from Watertown High. It was a wonderful way to gain hours, while also spending time in a fun, lively environment.

To add on, being there was a way I could also relive my days at the Cunniff where I attended. This was pretty evident when I took a trip down to the Haunted House.

Located in the basement of the school, many kids are always thrilled to see what lies ahead of them. Before going in, I heard distant screams, which reminded me of the time in third grade when I was so frightened here that I tripped over my princess costume while running away from the “ghosts.”

This time there were no ghosts. It was graveyard-themed, in which there were many people dressed up as creepy zombies from the dead.

Valentina Gaete, a junior at Watertown High, was asked to dress as a zombie.

“I feel like my attempt of scaring the children scared the parents more than the kids,” she said.

The downstairs layout started with a narrow hallway leading into a spacious room filled with tombs and gravestones. The eerie dark hallway in the Haunted House was filled with fog, creating a spine-chilling atmosphere.

The Haunted House was a good place to get a scare for both children and parents. There was also an option for people to have the actors not scare them.

For me, I would love to volunteer again next year and be part of such an impressive organization. It’s fun and spooky activities never seem to bore anyone, and it gives everyone a way to stay safe while also having a good time.

Jeannie Ngan is a member of the Raider Times staff.