The Democrat from Florida talked Climate Change, student loans, life lessons, and more during 45-minute Q-and-A on May 22

Presidential candidate Wayne Messam (in suit) poses with students and teachers after a question-and-answer session at Watertown (Mass.) High School on May 22, 2019.

On June 26 and June 27, two debates were held featuring 20 Democratic candidates for president. Wayne Messam was not among the 20 in Miami, partly due to his not announcing his candidacy until late March 2019 — shortly after he won re-election as mayor of Miramar, Fla. 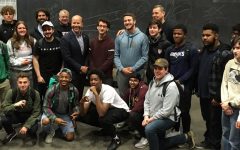 Messam was a wide receiver on Florida State’s 1993 national championship team. A few years later, he formed a construction company. He was elected to Miramar’s City Commission in 2011, then was elected mayor in 2015.

On the campaign trail, he visited Watertown High School on May 22, 2019, and talked with a lecture hall full of students and educators. The 45-minute question-and-answer included conversations about Climate Change, student loans, life lessons, and what it’s like to run for president.

Here are highlights from his Q and A at WHS. (Transcript edited for clarity and space.)

Wayne Messam, on his background

“My parents immigrated to the country from Jamaica. My father was a contract sugar cane cutter who was recruited to come do very hard labor in South Florida where there is a very large sugar production industry.  He actually cut sugar cane for 75 cents a row.

“What I wanted to impart to you was that I was once in your shoes … I want you to know that you can be whoever you choose to be, if you’re willing to work for it.  It won’t be easy at times, but if you surround yourself with positive role models, if you surround yourselves with like-minded individuals that are goal-oriented, you can actually do what you want to do.

“So I want to encourage you all, as you are making your decisions in terms of where your next step’s going to be in life, that you stay woke, that you be engaged in the civic and political process, because this nation will need what you may bring. If you sit back and do nothing, then nothing will happen, but if you get engaged, and be a part of the process, you can make an impact in this country. That’s what I chose to do.”

WHS: “Can you describe your pathway to become Mayor?”

Messam: “When my NFL career was cut short, a few years later my wife and I formed a professional construction company … We are a climate-conscious builder and general contractor … I received that designation back in 2009 long before I came into elected office. So when I talk about Climate Change and sustainable practice and infrastructure, it’s not something I’m just bringing up because I’m running for office. It’s been professionally a part of my life since 2009.

I want to encourage you all … that you stay woke, that you be engaged in the civic and political process, because this nation will need what you may bring. ”

“I was recently elected this past March to have a second term as mayor. I won re-election with 86 percent of the vote, which, in a normal sense and terms, is a pretty substantial victory. But I still kind of thought back that there’s about 13 percent of the voters that voted against me, so I still have a little work to do in my city.

WHS: “What’s your No. 1 issue that makes you want to become president?”

Messam: “Well, my No. 1 issue that when I launched my campaign — and my campaign is just under two months old — was that I made a knee-jerk proposal to forgive $1.5 trillion of outstanding student loan debt. I’m the first candidate to make that proposal … There’s $1.5 trillion in outstanding student loans. This affects about 44 million Americans, really impacting the financial upward mobility of these individuals, because they’re holding on average $30,000 a year, paying about $400 a month. It’s stopping them from being able to purchase a home, start a business, or even invest in their retirement …

“How am I going to pay for it? Well, I’m going to propose to repeal the tax cuts that were given to major corporations and the richest of Americans, which actually amounted to over $2 trillion last year alone.  So that would be the money source.”

Messam: “Personally, my position is that I trust women and their families and their health care professionals to make the best decisions for themselves. I think that what we’re seeing in terms of these states’ statutes that are popping up all over the country is deliberate and is intentional …

“To have an abortion is already a very tough, personal decision that a woman and her health-care professional and her family has to make, so for government to inject itself in that process I just personally believe that is not right.

WHS: What are your thoughts on resolving the issue of America’s contributions to carbon emissions?”

Messam: “America has obviously been a large contributor to carbon emissions because of factories and issues along that track. I thought that it was a very big mistake for President Trump to withdraw the United States from the Paris Climate Agreement, where the largest polluters globally got together to talk about the reduction of our carbon emissions. We need to act together, right now, because in 10 years we’ll have irreversible damage to the quality of the air …

I have commission meetings twice a month, I have workshops, I build my campaign around my obligations as mayor.”

WHS: “What’s been the most surprising part about running for president?”

Messam: “I definitely still have my business I have to run, I have a great team that manages my private business, and I have a city that I have. I have commission meetings twice a month, I have workshops, I build my campaign around my obligations as mayor.

“What I’ve learned the most is that we are so much alike. We want the same things in the terms of great quality of life. Parents want the best for their children. Everyday Americans want a job. They want to be able to work one job and take care of a family…

“Never be afraid.  Never think that there’s something that’s out of your reach, because if you work for it, you can definitely achieve it.”

WHS: “Has Miramar had to deal with race issues?”

Messam: “Because of our diversity in our city, it’s common for folks to see different people. Racism is everywhere, however it’s not a big issue in our city. We really try to be very intentional about the way the city operations and the police department reflects the community, so there’s really not much of an issue from a numbers standpoint.

“What I think, though, is that being the first black mayor of the city of Miramar, I’m not just mayor for the black residents in our community; I’m mayor for all of our residents.”

WHS: “How would students go about getting involved with your — or anyone else’s — campaign?”

Messam: “Whether it’s me or anyone else, I would advise you to give a call and volunteer on a campaign. It doesn’t necessarily have to be a presidential campaign. It could be your local City Council or City Commission or County Commission. So that you can understand what the issues are.

“I think that it’s important that you get involved in the process. Otherwise, when you become adults and on your own and you start seeing lawmakers making decisions that you just don’t agree with, then if you think about it, if you haven’t been involved in the process, who can you blame?  If you’re not at the table where policies are being discussed, your interests and your viewpoints are not being heard… Get involved to make sure there is action on those issues that are important to you.”

WHS: “What did football mean to you?”

Messam: “The game of football, I always said, is the perfect sport.  There are other sports that are great as well, because there’s so many life lessons. You have your individual accomplishments that you have to do, to be better personally.  But you have to fit in that team environment to perform a more specific role in the team.

“Athletics forced me to be disciplined. It forced me to set a goal, to realize the times when I wasn’t the best person for the job, and I had to sit on the bench, because someone else was a better fit for that scenario. Learning how to deal with that, to work harder, to make myself an investment, you’re going to come across that in life… you’re going to be working with people that will be a part of your team, and some you may not like. You have to learn to coexist, to work towards a greater cause and the goals of that organization. Being involved in sports has taught me all of those skill sets…

“Don’t be afraid of pressure. Put yourself in those high-stakes situations, because once you do it enough, then it just becomes normal.”