Off to explore new fields 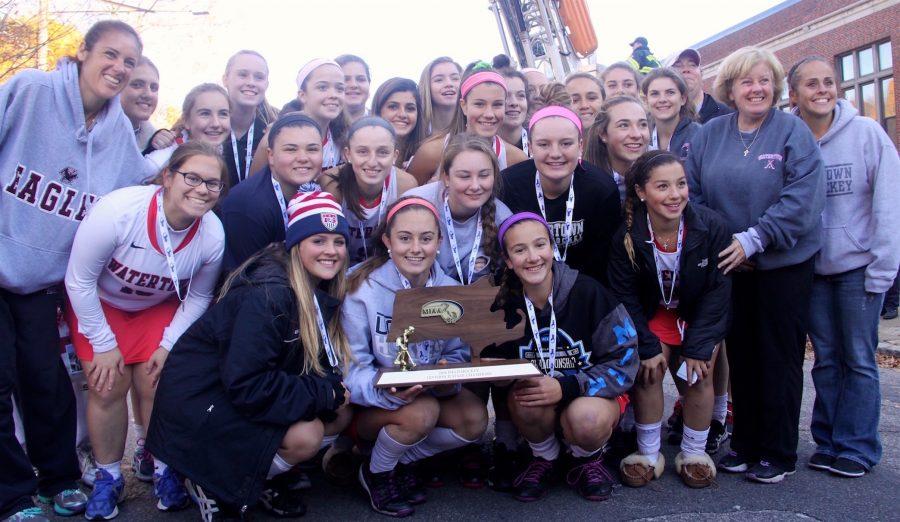 Kourtney Kennedy is set to walk along with her classmates on Friday night, June 2, as the Class of 2017 graduates from Watertown High School.

For four years, Kourtney was part of the field hockey team’s incredible run, and she leaves with the Raiders holding an unbeaten streak of 183 games and a  winning streak of 123 games — both national records.

I’m happy that I went through this program because now I know how nothing comes easy, it’s always about how hard you work”

Kourtney capped her career by scoring the deciding goal, a backhander with 8:49 to play, as Watertown beat Oakmont, 4-3, to win its eighth straight state championship on Nov. 19, 2016, at WPI. She got to play that game alongside her two sisters, Jonna, a junior, and Ally, a freshman.

In the fall, Kourtney will be playing field hockey at the University of Connecticut — a decision she made when she was a sophomore — but back on Dec. 7, she talked about the season, the team, and her four undefeated years.

Q: When does UConn start?

A: I’ll probably go to their camp in July and then it starts in the beginning of August.

Q: Please talk about committing when you were a sophomore.

A: I was down to two schools. I was not planning on committing that early, never. One school I was looking at gave me this deadline to decide by, or the scholarship would be taken. I guess the year before a girl held the scholarship a long time and then didn’t end up taking it, and then the school ended up having all this money they couldn’t spend [on the team].

Q: I imagine it was a relief to done so fast, but also stressful in a way worrying if it will be the right choice.

A: I visited a ton of schools, even freshman year. I think the recruiting process is getting so much earlier — especially with lacrosse, you see them committing as freshmen, which I can’t imagine doing. But it was a fun experience going to different schools and seeing what was out there. But, in the end, it was pretty stressful, but I’m pretty happy with it.

Q: How was the experience the last two years while your friends were trying to decide on their college choices, what they wanted to do and where they wanted to go, and you were done.

A: It was awesome knowing I knew where I was going to school, but I feel like I worked so hard for that, to finally get there. But it still doesn’t stop. Everyone’s like, “Oh you can slack off now.” But I still need to keep my grades up, I still need to work hard, even though I signed and everything. I still want to improve my game even more, be more prepared.

Q: Was this year different because you were a senior?

A: Every season was different for me. I think .. this has been the season we [as a team] have worked the hardest. It was a lot of hard work and nothing came easy. My sophomore year, we basically lost one senior and we had all the starters coming back, so that was a little different. And this year we lost six seniors and they all played a huge role in the team. There were a lot of spots to be filled and it was a total different season.

Q: How does the unbeaten streak affect you and the team? How does it play in your day-to-day thoughts?

A: We don’t even think about it. [Coach Eileen] Donahue addresses it at the beginning of the season, and that’s the last we hear about it. Unless we break a record, that’s the only time it’s brought up again. But it’s not [brought up] before the game, she’s not, “We’ve got to win this game to keep the inning streak alive.” If someone asked what the numbers are on the window, I wouldn’t know.

Q: What’s the hardest part about being in the middle of this unbelievable run?

A: A lot of teams are out to get us. Everyone wants us to lose, and not having that be our focus, knowing whatever game we’re playing we should go all out all the time and we should just play like we always play. And we can’t let all the other stuff affect us.

Q: What was it like playing with Ally and Jonna this year?

A: It was so cool. I mean I was really happy for Ally to do this because she’s been watching us for so long, she’s been to probably all of our games. But [playing with two sisters] is something that not everyone can say they did. It’s crazy. It’s so cool.

Q: Will you talk about the state title game? It was back and forth, and Oakmont scored more goals in one game then you usually give up in a season.

A: Right off the bat, they were in our end for a while. They had a couple of corners, but we just needed to stay calm, be poised … But that game was totally exciting. We had a couple of timeouts and halftime, we just talked, “Just don’t freak out, you can’t panic.” We were up, 3-1, and they somehow tied it up. And then there were like eight minutes left, and we went up, 4-3, and we just had to stall it in the corner because we didn’t want them to get in our end.

Q: You did a lot of the stalling to kill the clock.

A: We even got a corner, and Ms. Donahue said don’t even take a shot, just take it back into the corner, which I think was the best decision we could have done.

Q: Will you please describe the winning goal?

A: I forget who passed it me, but I was at the right of the circle, just entering, and I got by one girl and I saw there was a ton of space and that I would just be able to get the backhand off. I just pushed the ball out into that space and took the shot and it went in.

Q: Over the four years, did you have a favorite game or moment?

A: Winning states was one of the best feelings, with all the hard work you put in. Just knowing that all the work your teammates and your coaches put in was all worth it.  There’s just no better feeling than that.  And the games breaking the national records were pretty cool. They weren’t as intense, but they were still national records.

Q: So what is different about Watertown field hockey? How can you win 183 games in a row?

A: A lot of us play offseason, which is really helpful, but in the end I think it’s Ms. Donahue and all of our coaches because there’s never a time in practice that we don’t know what to do. She has full papers of drills we need to do and things we need to work on. She’ll go home from practice and look at old games, or look at new drills we can do in practice. She’s unbelievable. This past season she got her 600th win, which was unbelievable, and she said this is because of you guys. And we were like, “It’s all you.” We’re all so fortunate to have a coach like her. Because she not only changes us as field hockey players, but also as people. She teaches us so many life lessons.

Q: But the sport’s not for everybody.

A: I think for every girl that comes into the program it’s an eye-opener. Because for all other teams I played for it’s never been this committed, I’ve never had to work this hard. I’m happy that I went through this program because now I know how nothing comes easy, it’s always about how hard you work for something and how badly you want it.